This was the flash that I shared yesterday over on the Silver Expressions blog - SEx: 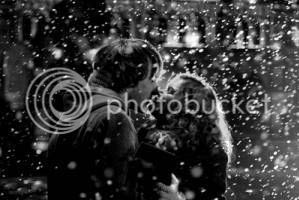 ONE
The shovel scraped the driveway as Seth turned to make another pass. He barely heard the rough sound for the growl of Slipknot blasting from the tiny headphones in his ears and his knit cap pulled low.

It was fucking cold out, but pushing the fresh eight inches of snow from Lady Clayborne’s drive had sweat rolling down his back beneath the wool-lined denim coat.

Shit. Lady Clayborne. He missed that clever old bird since her death six months ago. He stopped to lean on the shovel, glancing at the grand Victorian home that he'd lived across the street from most of his twenty-three years.

She’d always managed to surprise Seth with her mischief. He grinned as he thought of her, then turned to finish up the path to the back door.

TWO
Embarrassed at the curse that erupted from him, Seth ducked his head to pull the earbuds from beneath his hat. Jesus, he thought, as he stared at his snow covered boots. He was such an asshole. “I’m so sorry for that, ma’am,” he mumbled.

She laughed, ringing all sorts of bells in his memory. “And here I thought the day was about to get so much more interesting, Seth.”

His head jerked up and he stared at her. He’d shoveled the whole damn drive without even breathing heavy. He took in the dark curls, sparkling blue eyes, and smiling mouth that had starred in the majority of his adolescent fantasies. Not only did his heart rate pick up, but his blood settled heavily between his legs.

“Yeah, thanks.” He followed her into the kitchen, feeling like a teenager all over again. He couldn’t seem to take his eyes off the tight jeans covering her ass. Five years older, Jordan had kept him in a state of near constant arousal during the summers that she’d spent at her grandmother’s house. Nothing had changed there, he thought, as he adjusted the solid length of his cock through his jeans.

She reached the counter and turned quickly, catching him staring at her butt. He should have been embarrassed, but just couldn’t seem to make that work. Her hips begged for his hands. Her breasts swayed beneath the thick sweater, nipples hard little buds. He met her eyes, the laughter lighting them mixing with a heat that sent a jolt to his cock.

“Are you going to?” Her eyes traveled over his chest and stopped at the evidence of his reaction to her.

“Am I going to what?” He barely recognized his own voice.

FOUR
Seth put the cup on the counter behind her. He moved the hair away from her neck and settled his lips against her erratic pulse. God. Her scent made his head spin. He nipped her jaw, before meeting her eyes. His intent must have been clear, because her soft lips parted on a gasp. Seth took full advantage, kissing her thoroughly, sliding his tongue into her mouth to tangle with hers.

Sliding his hands down over her ass, he lifted her more fully against the erection threatening to burst through his jeans. Her moan filled his mouth as she shifted her legs, opened them as he thrust gently against her soft sex.

After several long minutes that left them both breathing raggedly, he pulled back to meet her eyes. He couldn’t stop the grin that lifted his mouth as he took in her flushed cheeks and plump red lips. Then he answered her question: