After I received news of the acceptance of my second book, my hubby said he'd like to take me somewhere to celebrate. [sigh] Such a good man I have.

We go out to eat quite a bit, so that didn't really appeal to me. What did have me interested though was the idea of seeing men hitting each other on the playing field and it just so happened that the Lions were practicing down at Ford Field that day. We had never been in the stadium before for anything relating to football, so it was a good opportunity to see the new venue.

It was fun to wander through the doors and feel the excitement. The optimism of a brand new year. 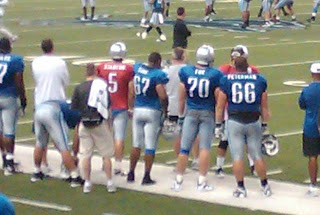 Some may be thinking: This is what you chose as a celebratory outing? And really, let's face it, the Detroit Lions aren't exactly the team that everyone is watching. Hell, even diehard fans have been tempted to turn our backs. That's just it though, we haven't. I'm a relatively new spectator, having just started really watching in the last four years, and I still don't understand everything there is to know about it. I know I love the game ... and I love this team. My team.
I'm excited about the new season ... for the Lions and for myself. Dream big, boys. This is our season to shine.
at 1:57 PM