Dawn (domesticwitch.blogspot.com) participated in a blog circle featuring decorative roosters. I didn't see it early enough to get into the round, but decided to post my rooster here anyway.

You may recall that I "hamster sat" several months ago while our friends visited the Grand Canyon. This fun guy was a thank you gift for taking care of Teddy. I love the vibrant color and think of them each time he catches my eye!
at 11:21 AM

Email ThisBlogThis!Share to TwitterShare to FacebookShare to Pinterest
tags: friends 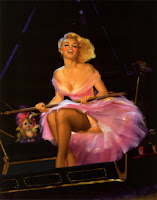 It has recently been brought to my attention that my life is lacking in fun. Not happiness. For the most part, I'm as happy as the next girl...but good, old-fashion F-U-N. It isn't that I don't know how to have fun. I love to hang out and laugh with my family and friends. It just isn't something that I've been doing much of lately.

I need some suggestions. How do you kick back, relax, and have fun?
at 4:43 PM

Scent of a man

I love the way men smell. Walking behind a man this morning I could smell the tantalizing scent of his aftershave and it started my day off just right.

It's not just about the aftershave though. Give me that hardworking guy that's pitching straw, laying brick, or working the construction site. Or buttoned up in a suit and tie. There's absolutely nothing wrong with mixing that fresh showered, aftershave aroma with the scent of a man making an honest living.

Let's be truthful though. There's nothing that beats the scent of a man's skin while he's making love. Hot. Primal. Sexy.
at 1:22 PM

(Borrowed the idea for "5 Things" from my friend Dawn at www.domesticwitch.blogspot.com)

Email ThisBlogThis!Share to TwitterShare to FacebookShare to Pinterest
tags: 5 Things

We have a nest on the elbow of the downspout protected by the overhang, that has been home to several types of birds during the last five years. It was originally built by some robins and they build a pretty sturdy nest.

This year a pair of mourning doves scouted it out early and actually managed to hang onto it through their two broods. Since doves are known to build notoriously flimsy nests usually consisting of three twigs in the Y of a branch, this well-built nest must have felt like a mansion.
I love to watch the calm cyclical rhythm of Nature...and this little bird nest is visible from my favorite chair on my front porch. The parents were both up in the nest yesterday with the two fledglings. All of them were fluttering around and carrying on, when one of the babies fell out. A parent flew down and watched from some distance, seeming to be waiting to step in if the baby showed any signs of clear distress. The baby hid among the ferns and foliage, making small peeping sounds, but otherwise was okay. Later in the evening the parent was feeding the baby. It would appear all that fluttering earlier in the day was all part of the plan.
Soon our little boarders will be gone for the summer. Once the last brood has flown, the parents vacate the nest. Possibly another "couple" will move in, but it's doubtful so late in the season.
Have you been Nature-watching some little critters as they travel around the Circle of Life? Please share. One of the babies decided to "people-watch" me as I took his picture.
at 8:11 AM

The other day my daughter (who has been on her own for several years now) told me that peanut butter and jelly sandwiches never taste as good at her house as they do at mine. She said it really didn't make sense because the bread was the same, as were the peanut butter and the jelly. As we talked a bit more about this she told me that there were also certain things that she loved to eat at my home, but she didn't buy for her own place. Hmm.

This conversation that really had to do with nothing really important, but was interesting just the same. It also made me wonder about some of the things that I grew up eating, but never made for my own family.

The first thing that came to mind was meat loaf. Let's just say that, try as I did, I never could get it to taste like my mom's. And the pb& j's that I make now are made on wheat bread (rather than the white I grew up on) and I use only jams now. (If I never eat grape jelly again, I'll be completely content.)

Do you find that you eat the same things as when you were growing up, or have you gone down a completely different road? Are there certain foods that just taste better when enjoyed in the place where the memories were made -- like my daughter's pb& j's?
at 10:49 PM

Still blogging over at Jas's place...

In case you've just arrived to my blog, I have been guest blogging this week over at the Jasmine Haynes Files. Jasmine Haynes is a totally amazing author and truly dear friend. She invited me to celebrate the release of Open Proposal over there. Please give it a look and leave a comment, too!
at 10:34 PM

Finished the first draft of Salvage my Heart. Well, "finished" is probably not the right word, but it's done and will be moving into the next step: first read-through. That will begin tomorrow.

Oh. My. Gods. Dreams really do come true. Not just any dream, or someone else’s dream, but my dream. The dream I’ve had since I was a little girl. The dream of becoming a published author…of having my name on the cover of a book. That dream came true yesterday.

Like many others, I’ve written my whole life. Poems, articles, newsletters, even stories. I was making my way through the National Novel Writing Month (NaNoWriMo) in 2007, working away on a light-hearted romance, when suddenly it took a sharp turn into a dark tale filled with erotica and immortal love. I sat there staring at the words on the screen. Shocked. At that moment, I realized that was what I needed to be writing. At the end of the month, I was a NaNoWriMo winner…meaning I had successfully written 50,000 words in 30 days. Unfortunately, those words were stops and starts, freewriting, random scenes, and a lot of jumping around. After three months of trying to untangle the mess and create what I wanted for the story, I had to set it aside and start something new. It was a difficult decision to make.

It was soon after making that decision that my best friend said to me: “I don’t think you’re ever going to finish writing something that I can read.” That’s right. A challenge issued by my best friend. What could I do? I met that challenge. In less than three weeks the first draft of Open Proposal was in her hands.

Right now, I’m finishing up the first draft of Salvage my Heart, Book 1 of a trilogy, while the characters of Book 2, Tattered Hearts, wait impatiently for the chance to tell their story.

I’m ecstatic to be writing a Morning After blog for Open Proposal. Samantha, Eve, and Roman will live forever in the secret place in my heart where dreams grow.
at 10:28 AM

Email ThisBlogThis!Share to TwitterShare to FacebookShare to Pinterest
tags: accomplishment

My first book will be released as an eBook this evening through http://www.liquidsilverbooks.com/!!!

I'll post more tomorrow about this dream come true, but today (and the rest of the week) I'll be guest blogging over at the Jasmine Haynes Files! Please hop over there and join me...

Jasmine Haynes has invited me to guest blog at the Jasmine Haynes Files on Monday, so be sure to stop by and leave a comment! First book release and first guest blog...all in one day!!

There is no way I'm only at 63% of the first draft SmH. I figure there's only two major scenes left, then the wrap up. Granted there's plenty of rewriting to look forward to after a thorough read-through, but it definitely feels like this is about done for the initial write.

And just 2 days until Open Proposal is released. I think they release in the late afternoon or early evening. WhooHOO!!
at 9:31 AM